We are all about keeping our little girls safe and happy. 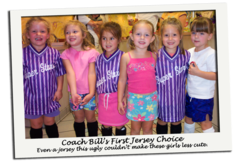 It all started when our Coach Bill was recruited into coaching his daughter's soccer team. This was his first experience as a soccer coach. After getting his first roster, he realized the team needed jerseys. So what did he do? He had a brilliant plan. He went to the local soccer store and said, "I need jerseys. What do I do?" He was handed a catalog of jerseys and told all he had to do was pick one out and they would order them for him. What could be easier? Well, after making one choice and spending a few dollars, he had half a dozen jerseys. To his chagrin, the jerseys were made out of the same fabric as umbrellas, hung down to the girls' knees, and had the same fashion sense as a 70s disco king. (Was the lack of fashion sense a reflection on Coach Bill?) 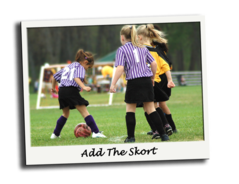 Well soccer-mom found this to be intolerable. Soccer-daughter did too. Besides hating the jersey, she even refused to wear the soccer shorts her Dad had bought her. Of course, in everyday life, she never wore shorts, but what else could you wear playing soccer? Leave it to soccer-mom. From who knows where, a black skort appeared. Ah, the joy in their daughter's eyes at the sight of it. Thus, the soccer skort was added to the uniform. This was a huge hit with the whole team and before he knew it, Coach Bill's entire team was wearing skorts. During their equipment check, the referees faces would show a puzzled look as they considered if a skort broke any of the Laws of the Game, but they never found a violation. However, the issue of the jersey was still a problem.

After searching all over the web, he still couldn't find a jersey that would fit his girls. Again, leave it to soccer-mom. By 2007, with the help of some friends, Breakaway Fashions was launched and the girls soccer jersey problem was solved forever. 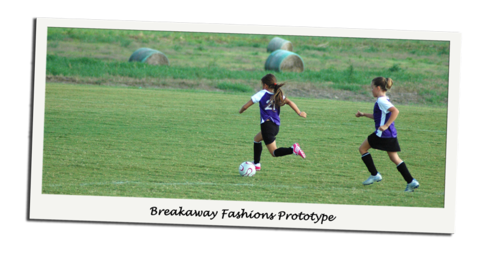 The first season was good, but not perfect. We tried to stick to the purple and white of past seasons. The soccer skort was great, only a few tweaks were needed. The prototype jersey was made of a fantastic wicking fabric, but it was a little lacking in style. Coach Bill had harbored much higher hopes on the style front; this was not looking good. 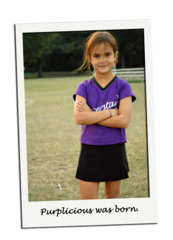 Oh ye of little faith; in one season, the progress was dramatic. Breakaway Fashions came out with not only some stylish solid colors, but some very trendy prints. Coach Bill raised an eyebrow at the prints. "Will coaches go for these?" As it turns out, yes they would. (He failed his style test yet again.)

So join us in our quest to keep our daughters safe and happy. Get your team jerseys so comfortable, they'll want to sleep in it. Get them a skort; after all, they're girls. And then let them play!